Henry Ossawa Tanner was an African American artist of the late 1800's-early 1900's. I've been into his tonal palette and emotional Biblical subject matter. I wanted to post one appropriate to Resurrection Sunday. 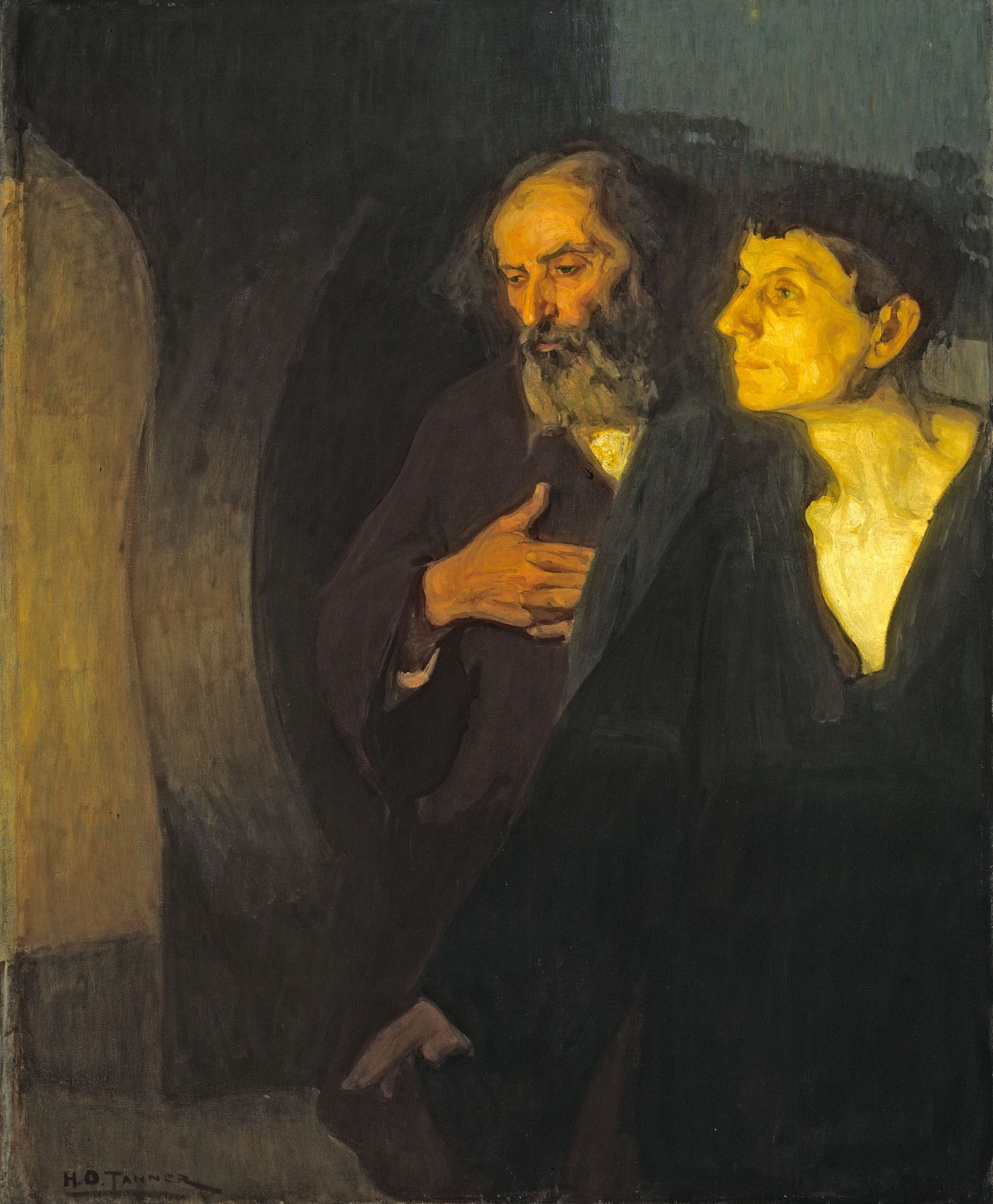 Two Disciples at the Tomb
Henry Ossawa Tanner
circa 1905-1906

John 20:1-9
Now on the first day of the week Mary Magdalene came to the tomb early, while it was still dark, and saw that the stone had been taken away from the tomb. So she ran and went to Simon Peter and the other disciple, the one whom Jesus loved, and said to them, “They have taken the Lord out of the tomb, and we do not know where they have laid him.” So Peter went out with the other disciple, and they were going toward the tomb. Both of them were running together, but the other disciple outran Peter and reached the tomb first. And stooping to look in, he saw the linen cloths lying there, but he did not go in. Then Simon Peter came, following him, and went into the tomb. He saw the linen cloths lying there, and the face cloth, which had been on Jesus' head, not lying with the linen cloths but folded up in a place by itself. Then the other disciple, who had reached the tomb first, also went in, and he saw and believed; for as yet they did not understand the Scripture, that he must rise from the dead.

Take a look at Henry Ossawa Tanner's work,
depending on your style,
at the Smithsonian,
Wikipedia
or The Athenaeum.

Turn at the Tree 6x6 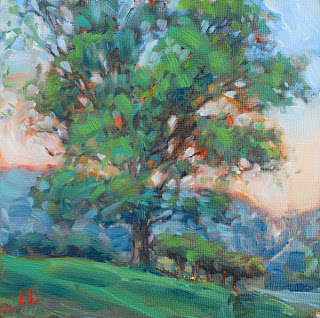 Turn at the Tree
6x6, oil on board
sold

This is the same tree as painted in "Last Standing". In days gone by this tree marked the turn to Stanley Owen’s house. A friend of Stanley's described his home as "a modest wooden home with a million dollar view of the sunset over the village of Midlothian". The tree is located in the median in front of the Midlothian BMW dealership and near Walmart.
Posted by Unknown at 10:31 PM 0 comments

My Framer is the Coolest

Today I stopped in to Collector's Gallery to pick up a few of my framed paintings (the two below and one that was immediately taken to Caturra and hung, Bright Morning): 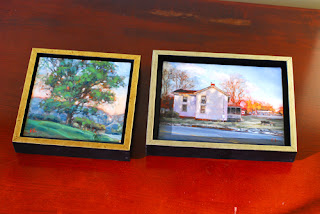 After talking a bit David Humphrey puts this in my hands: 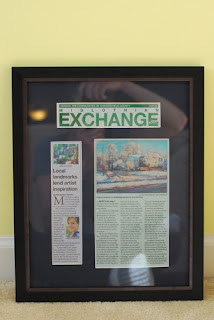 Um. how amazing and kind is that? He framed the article about my project to painting the town of Midlothian. We don't get the newspaper and I hadn't seen the printed form of the article yet. I thought it was only published online. Anyway. David Humphrey is great.

And here's one-to-grown-on, just because it cracks me up. What a pup. :) 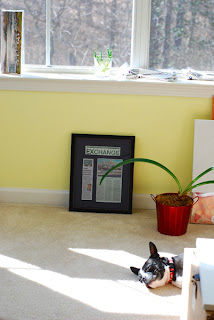 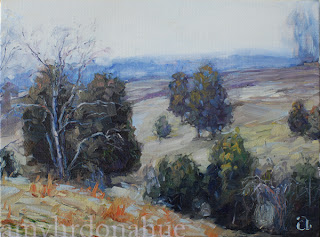 A bit about the tools of the trade.

Everyone knows about paint brushes. Yes, I use them to apply paint. Just as important are the tools to remove paint and push it around on the canvas. 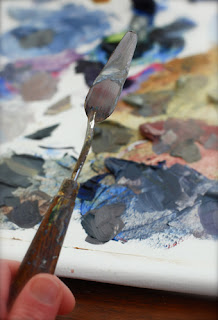 The palette knife is not only useful for mixing paint, but for controlling the amount of paint on the canvas. In the photo below I scraped a "spot" for the spindly tree on the left as well as removing some of the too-wet-and-too-thick paint in the foreground. 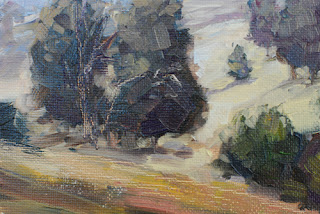 The more I paint the more I find there is no formula to making a painting. What worked yesterday won't work today. The each landscape brings another discovery in my journey as a painter. 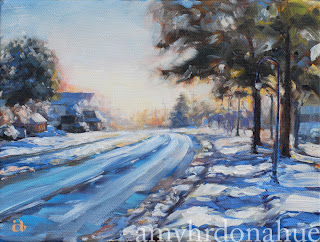 
It was the sun reflecting off the road, the haze in the air and those shadows on the snow that drew me to this scene. Snow scenes are such strange things to paint. The laws of warm and cool, light and dark, sky and land, are reversed.
Posted by Unknown at 8:10 PM 0 comments

To my Midlothian friends, does this house look familiar? You would probably recognize it immediately from the front. Care to take a guess? 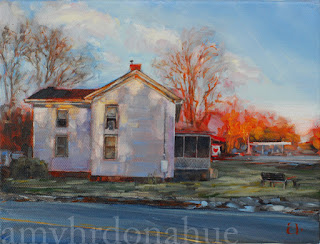 Naming a painting can be a tricky thing. Sometimes a title comes to my as I paint. Sometimes not. Sometimes all the wrong titles come to me. For example, "Be Mine", "February's Flame", "The Love Seat",  and something with "Cupid" in the title. Luckily I have a husband who helps out by veto-ing my tacky titles. 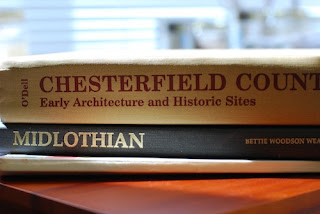 I've been reading quite a bit on the history of Midlothian. Fascinating stuff. Around 1950 the Lea Company built a sawmill near the location of this house. One of the books said the home in my painting was probably build by the company to house mill workers. 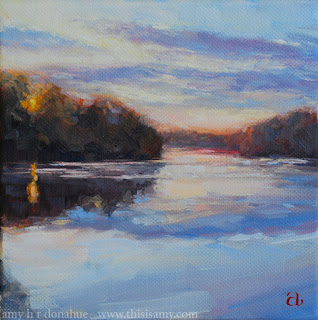 To study the light and landscape is in a small way to meditate on the glories of Christ. 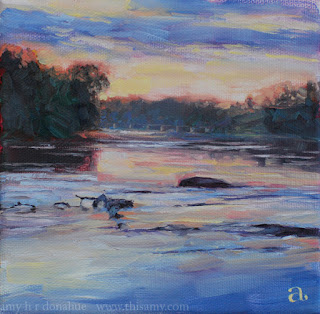 
Of all the creatures both in sea and land
Only to man Thou hast made know Thy ways
And put the pen into his hand
And made him secretary of Thy praise.

O Sacred Providence, who from end to end
Strongly and sweetly movest!
Shall I not right, and not of Thee
Through whom my fingers bend
To hold my quill? Shall they not do Thee right?
-George Herbert

I would substitute "brush" for "quill" and "pen".

It is my deepest desire.

In some small way might He be seen as glorious by a bit of color on my canvas.
Posted by Unknown at 9:01 PM 0 comments

I still watch this almost weekly.

I should watch it every day. I would paint with less fear.
Posted by Unknown at 6:17 PM 0 comments

Reflections of the Silver Lining 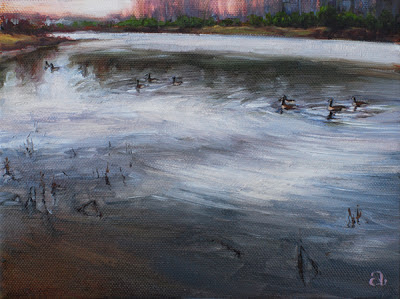 Reflections of the Silver Lining
8x6, oil
sold
This piece will join Familiar Places, the collection of paintings at Cafe Caturra Midlothian, on Friday.
Purchase FAQ

This one was a ton of fun. Lots of subtle color. Practice working the grays. Lots of glazing. Take a look at some of the process shots:

and the final below: 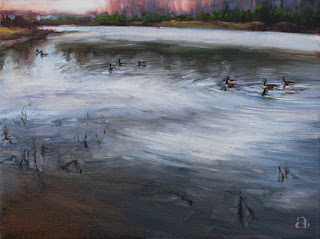